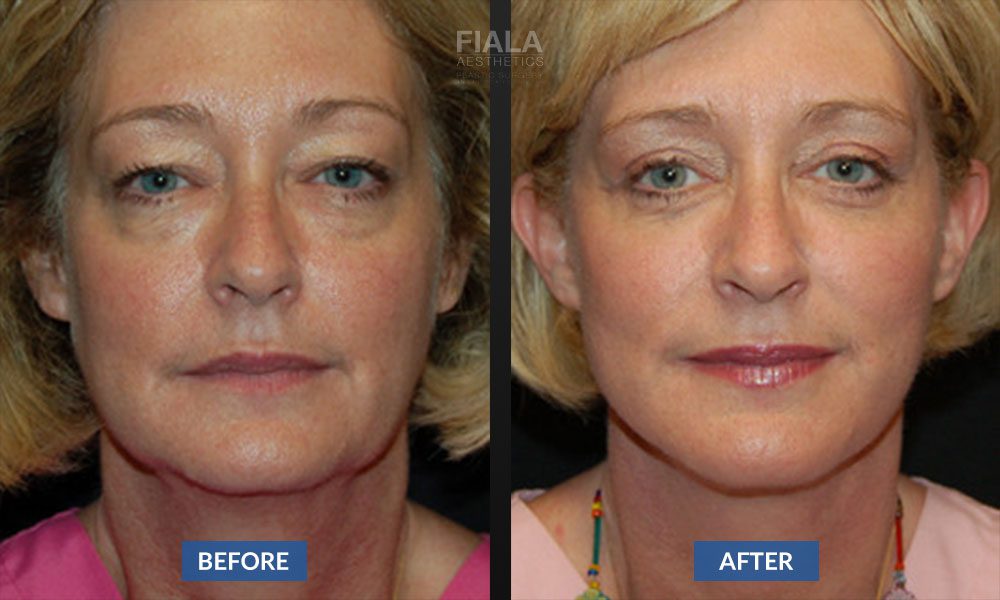 What is a Facelift?

They say that “time waits for no one.”  Our faces certainly do show the passage of time – and the Florida sun doesn’t do us any favors!  Jowls form on a formerly smooth jawline.  Neck skin that used to be firm – loosens.  Firm skin over the cheek becomes more lax or wrinkled.

Fortunately, there are things we can do to combat these aging changes – modern advances in plastic surgery make keeping a youthful & healthy appearance easier than ever.  It’s no small wonder that the facelift operation is now the third most popular facial surgery performed in the United States!

Who is a candidate for a facelift?

If you are bothered by signs of aging in your face, facelift surgery may be right for you.

A facelift can improve:

Before & After Photos View Gallery

How is the facelift performed?

In general, a facelift is performed using incisions around the ears to lift and re-position the soft tissues of the cheek and neck. Dr. Fiala has advanced fellowship training in this area.  While they use somewhat different surgical methods, both can obtain a more rested and youthful contour to the face and neck, correcting the lax skin while still maintaining your distinctive natural look and characteristics.  It does not look tight or distorted, but is very natural.  Most patients feel they look at least 8-10 years younger after the procedure.  We want to maintain your distinctive look and facial character – a younger, more refreshed version of you!

The incisions are carefully hidden by the contours of the ear cartilage or within the hair – so once everything is healed, the incisions are typically invisible at conversational distances.

A short scar mini-facelift technique, known technically as the MACS-lift, is available for patients who do not require as much corrective work in the neck and jawline area.

For patients who have lost facial volume in the cheeks, temples, or near the eyes, facial fat grafting procedures are also offered. This technique involves borrowing a small amount of fat from another body area – commonly the abdomen – and injecting it in a micro-droplet fashion to restore the three-dimensional contours of the youthful face.  It can be a very powerful enhancement when combined with a facelift or facial resurfacing.

Can other plastic surgery procedures be done at the same time?

Often, patients may benefit from other facial procedures.  Assuming you are in good health, these can often be safely performed at the same setting, for a harmonious rejuvenation effect.  This may include eyelid lifts (blepharoplasty), forehead lifts, fractional laser resurfacing, chemical peels or micro-fat grafting volume enhancement. Dr. Fiala will make recommendations about which of these procedures might give you the best aesthetic outcome at the time of the consultation, based on a thorough evaluation of your facial anatomy. [/toggle]

Most of our patients are very pleasantly surprised – the facelift does not have a painful recovery.  Typically, pain medications are only used for a few days, postoperatively.  There is some swelling, which gradually resolves over about 3 weeks for a full facelift procedure and 1-2 weeks for a mini-lift.  You may drive once you are no longer taking pain medication.

One of the biggest parts of the recovery process for the average facelift patient is the emotional part of recovery. There’s always some anxiety related to facial surgery – and we’re here to help support you through this process.

With the techniques that Dr. Fiala uses, most people get a 8-10 year period of improvement, give or take.  Even when the facelift relaxes a bit, you’ll still continue to look better than if you hadn’t had the operation, and better than your unoperated friends and colleagues.

In a younger patient (40-55), the tissues are in better condition, and the patient is less likely to have medical issues.  However, the younger patient may not have such a dramatic change, since the amount of skin laxity is still relatively small.
Patients with more skin laxity get a more dramatic result when comparing the “before” versus the “after” photographs, but their skin and soft tissues are thinner and less elastic.  There may be more medical issues to sort out, prior to anesthesia and surgery.

A second facelift can certainly be performed for those who have already had one, to improve recurrent looseness in the cheeks, jawline or neck.  In general, the second facelift is about carefully tailoring the skin and soft tissues – less skin is removed the second time than the first time.

What is a ‘non-surgical facelift’?

Wouldn’t it be nice if you could get a surgical result without surgery?  Unfortunately, we’re not quite there yet – there is no substitute for a well-done facelift.  It is, by far, the most powerful method we have.  Other methods, such as fillers or fat grafting, Ulthera, and radiofrequency, can be used to restore some of the youthful features, but aren’t even close to the level of correction that a facelift can do in terms of repositioning tissues that have fallen or tightening tissues that have loosened.  At best, the non-surgical methods only give about 30% of the effect of a surgical facelift.  So surgery still remains the best tool.
Some physicians will call the use of fillers in large volumes in the face a “liquid facelift”.  Fillers restore volume but don’t tighten or lift tissues.  And most fillers are temporary and need to be repeated every 6 months or so.  Using that much filler can also make the face look abnormally puffy or swollen.