Need a trachea? Grow it in the lab!!

Need a trachea? Grow it in the lab!!

Posted on July 7, 2011
Here is the amazing story of how a man with cancer of the trachea (and no other remaining treatment options) was treated with a tracheal transplant created from “scratch” in the tissue engineering lab, using the patient’s own stem cells. Very exciting, cool stuff, reported today in the Wall Street Journal.************
Cancer Patient Saved With Lab-Grown Windpipe
By GAUTAM NAIK, Wall Street Journal
Doctors have replaced the cancer-stricken windpipe of a patient with an organ made in a lab, a landmark achievement for regenerative medicine. The patient no longer has cancer and is expected to have a normal life expectancy, doctors said.
“He was condemned to die,” said Paolo Macchiarini, a professor of regenerative surgery who carried out the procedure at Sweden’s Karolinska University Hospital. “We now plan to discharge him [Friday].”
The transplantation of a lab-made and permanent windpipe had never been successfully done before the June 9 procedure. 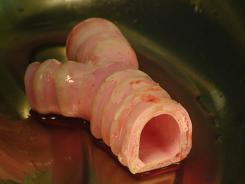 Photo: The lab-grown tracheal implant immediately before it was placed into the patient. The 36-year-old man who received the organ is now free from cancer.
The researchers haven’t yet published the details in a scientific journal.
The patient’s speedy recovery marks another milestone in the quest to make fresh body parts for transplantation or to treat disease. More immediately, it offers a possible treatment option for thousands of patients who suffer from tracheal cancer or other dangerous conditions affecting the windpipe.
“It’s yet another demonstration that what was once considered hype [in the field of tissue engineering] is becoming a life-changing moment for patients,” said Alan Russell, director of the McGowan Institute for Regenerative Medicine in Pittsburgh, who wasn’t involved in the latest operation.
In a notable advance in organ transplants, surgeons at UC Davis Medical Center have restored the voice of a woman who couldn’t speak on her own through a transplant of the larynx, thyroid and trachea.
In 2006, researchers disclosed how they had implanted lab-grown bladders into children and teens with spina bifida, a birth defect. And in 2008, members of a team that included Dr. Macchiarini said they had given a patient a new windpipe made partly from her own cells, and partly from “scaffolding” material taken from a cadaver.
The latest experiment shows that a fully functioning windpipe can be manufactured entirely in the lab without the need for a cadaver.
“It makes all the difference,” said Dr. Macchiarini. “If the patient has a malignant tumor in the windpipe, you can’t wait months for a donor to come along.”
The patient in this case is a 36-year-old Eritrean man, a father of two studying geology in Iceland. Surgery and radiation treatments failed to stem a cancerous growth in his windpipe.
When the tumor reached about six centimeters in length it almost completely blocked the trachea, or windpipe, making it hard for the patient to breathe.
With no suitable donor windpipe available, the final option was to try to build one from scratch. Dr. Macchiarini had good reason to feel emboldened: He had successfully transplanted cadaver-based windpipes in 10 patients.
A windpipe is a hollow tube made up of respiratory cells that sit atop a scaffold of various tissues, such as cartilage and muscle cells. As a first step, a team led by Alexander Seifalian of University College London used plastic materials and nanotechnology to make an artificial version of the scaffold in the lab. It was closely modeled on the shape and size of the Eritrean man’s windpipe.
Meanwhile, researchers at Harvard Bioscience Inc. of Holliston, Mass., made a bioreactor—a shoe-box-size device similar to a spinning rotisserie machine. The artificial scaffold was placed on the bioreactor; then, stem cells extracted from the patient’s bone marrow were dripped onto the revolving scaffold for two days.
With the patient on the surgery table, Dr. Macchiarini and colleagues then added chemicals to the stem cells, persuading them to differentiate into tissue—such as bony cells—that make up the windpipe.
About 48 hours after the transplant, imaging and other studies showed appropriate cells in the process of populating the artificial windpipe—which had begun to function like a natural one.
There was no rejection by the patient’s immune system, because the cells used to seed the artificial windpipe came from the patient’s own body.