Non-surgical treatment for the double chin?

Non-surgical treatment for the double chin? 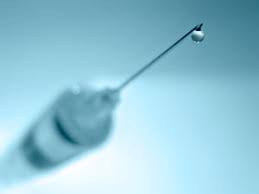 In a press release this week, Kythera Biopharmaceuticals and Bayer HealthCare’s dermatology business, announced two European Phase III studies evaluating their injectable adipolytic agent, for the reduction of localized fat under the chin. The product, called ATX-101, has sucessfully passed earlier studies.
In layman’s terms, this is a shot that makes your double chin go away without surgery! We’ve talked about ATX-101 before, in earlier editions of this blog. It looks like the product is progressing well towards clinical use.
The two studies will enroll approximately 720 patients total to assess safety, tolerability and efficacy of ATX-101 in the reduction of submental fat. The studies are being conducted in multiple centers in the United Kingdom, France, Germany, Belgium, Spain and Italy.
Jean Paul Ortonne, MD, a dermatologist and ATX-101 clinical investigator in France said, “There is a huge demand for a safe, effective and approved injectable treatment for localized fat reduction. These Phase III studies are positive steps toward providing patients with a well-studied, clinically-proven treatment to reduce localized submental fat without surgery.”
Editor’s note: ATX-101 is, as far as I know, deoxycholate. This was a part of the infamous “LipoDissolve” formula that received so much press and hype over the last few years. Now, at least, there is some actual science to prove that it can work, and to figure out some of the side effects and limitations of the product. Hopefully, we’ll see the results of the study within the next year, or so. What will be interesting is whether people will want 40-70 injections over several sessions, with several months of waiting…or whether they will still go for the proven effective approach of liposuction.
(photo credit: americanhealthandbeauty.com)