Here is a nice story about a 9 year old who is having reconstructive plastic surgery to fix a deformed ear that he was born with, due to a condition called Goldenhar syndrome. 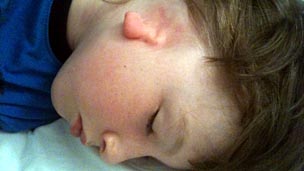 Now, at age 9, he has undergone the first step of the classic two to three stage surgical reconstruction to transform the nub of the earlobe he was born with, into to something that looks like an ear.
In the first stage, a framework made of cartilage is put underneath the skin, in the correct position. The cartilage is typically harvested from the ribcage, via an inconspicuous incision, and carefully shaped and wired together.
In the second stage, a skin graft is placed behind part of the framework, in order to make the “sulcus” – that part behind your ear. With a master surgeon, the results can look pretty good. Sadly, the reconstruction doesn’t restore any functional hearing ability – it only restores the normal appearance.
Currently, new progress on tissue engineering may change this method. Researchers have learned how to grow chondrocytes – cartilage cells – and shape them onto a re-absorbable framework. In animal experiments, pioneering work by Dr. Joseph Vacanti, Director of the Tissue Engineering and Organ Fabrication Laboratory at Massachusetts General Hospital in Boston, has created an artificial polyester scaffold which is shaped to mimic the contours of a human ear. Then, the framework gets “seeded” with cartilage cells, which grow on it, with a little bit of help. The result is a structure that looks just like a human ear….which can then be transplanted to its final location.
Sounds like science fiction, I know. So far, this treatment hasn’t been done in humans, but that day is not too far away. And the applications don’t stop at just the human ear. Researchers can also make functional heart valves and other body parts the same way. Much better than a mechanical heart valve that requires a lifetime of risky blood-thinning medication.